A commission of the german parliament “Bundestag” investigated 2012/2013, how the neo-nazi terror-cell called “National Socialist Underground” (NSU) could stay undetected from the german security apparatus for more than thirteen years, from 1998 to 2011. In that time the trio of Uwe Mundlos, Uwe Böhnhardt and Beate Zschäpe should have committed a …

“… series of murders of nine immigrants (eight Turks and one Greek (…); the murder of a policewoman and attempted murder of her colleague; the 2001 and 2004 Cologne bombings; and a series of 14 bank robberies.” (wiki)

Parliamentarians of the commission made clear from the beginning on: The trust in the german security apparatus was broken. In that way the result of the commission was preprogrammed: “There is no evidence at all”, that the apparatus tolerated the trio or even actively supported them (tagesschau).

To restore the lost trust the parliamentarians had to ignore whistleblowers and rely on the reassurement of the apparatus. A few examples:

A german was employed at the Defense Intelligence Agency “DIA”, in the 66. Military Intelligence in Hanau. The whistleblower said, that he was listening to a conversation between two leading agents: Mister “T. R.” and “T. H.”. They spoke about the deadly assault against two policemen in Heilbronn on 25 April 2007, which resulted in the death of Michele Kiesewetter. The aim of the observation should have been Mevlüt Kar (He is an alleged CIA-informer). In that time Kar was involved in the creation and arming of the islamic terrorist-cell “Sauerland-Gruppe” in Germany. In spite of an arrest warrant of Interpol and the german demand for his extradition, Kar should be living in Turkey.

The whistleblower was not even invited and not interviewed by the commission – on contrary he was attacked by the media. The german journalist Hans Leyendecker from the newspaper “Süddeutsche Zeitung” wrote a hit-piece, that the man would have had a bad reputation in the apparatus and even could have forged an intelligence document. The whistleblower distanced himself from this document, (taz) its source is still dubious.

During an interview with the newspaper “taz” he said, that he feared for his life. In the article the man was portrayed as a nut due to his insights, that the WTC-towers were destroyed by controlled demolitions, that Osama bin Lades was killed 2001 and that there is a connection between right-wing extremists and islamic terrorists. In his second interview with the “German Federal Office of Criminal Investigation” (Bundeskriminalamt) he finally withdrew his account. (Report of the commission, page 662)

Already 2010 the magazine “stern” connected Mevlüt Kar to the attack on the policemen. The “stern” reported, that after the attack two arabs were encountered at the crime scene and were interrogated (stern). One should have had the contactman of Kar (heise).

Here is a identikit picture of the attacker, who should shot at the colleague of Kiesewetter. 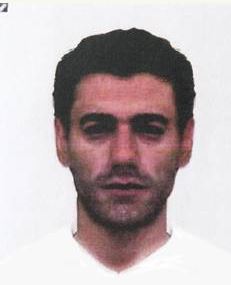 It bases on the description of the survived policeman Mister Arnold.

One attack gun was a russian type “Tokarev”. Former members of the the “Sauerland-Gruppe” said, that they were trained in terrorcamps with this “Tokarev”. Witnesses saw one fleeing man, who jumped into a car after the driver gave a russian order “dawei”. This is identikit picture of the man: 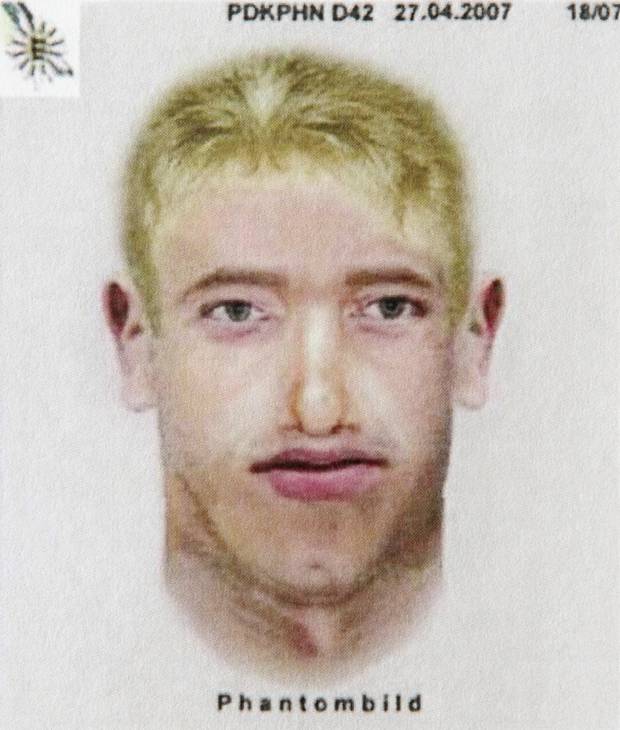 Leyendecker also wrote insultingly about the informant “Erbse” of the german intelligence service “Verfassungsschutz” of Baden-Württemberg. Referring to sources inside the intelligence community the informant would have had a “deranged personality” (sz). Again the commission did not invite the informant to testify, but the agent Günter Stengel. He told the parliamentarians about his informant “Erbse”. In 2003 “Erbse” told him about the existence of the secret cell “NSU”. Stengel also said, that his superior did not want hear about it. Stengel reported the commission, that there was a smear and fear campaign against him. After he did his critical statements in 2012, he was spied out and insulted as a “traitor” (kontext). The parliamentarian Dr. Eva Högl (SPD) contested Stengels account, she would “not believe him one word.” (tagesschau)

Furthermore the commission believed and overtook incredible reassurements of the apparatus. For example the leader of the commission Sebastian Edaty (SPD) said, that the enormous shredding of documents from the “Verfassungsschutz” was probable done due to “institutional foolishness” (tagesschau). The shredding-campaign started on 11th of November 2011 and ended in July 2012, hundreds of files were destroyed, although many files had connections to the trio. The chief of the Verfassungsschutz Erich Fromm resigned in June 2012, because the campaign happened without his approval. He said, that he was deceived by his own staff.

It was possible to reconstruct files. Some documents were overlooked by the commissioners for a few hours in the headquarter of the “Verfassungsschutz”. Afterwards the parlamentarians declared, that “conspiracy theories” were debunked successfully. (Tagesschau)

Another example is the parliamentary “acquittal” of the “Verfassungsschutz”-agent Andreas Temme. In the year 2006 he was shortly in police custody as a murder-suspect. The criminal police in Kassel had to detect him, because he did not show up to a public “call for witnesses”. The police did not believe his excuse, that he did not notice the shooting in the internet-cafe, where he was surfing in the moment. The commissioner Dr. Eva Högl (SPD) said, that Temme was not the murderer. Nevertheless the “Verfassungsschutz” should have allowed the police questioning his islamic and right-wing informants. The police would have been focused too long on Temme and was on the wrong track. (hr-online)

The commission never questioned, whether the trio really had the officially described “master-role” in the attacks. The three people could also be scapegoats, patsies. The police found DNA in crime scenes – but not a single sample matched to Mundlos, Böhnhardt and Zschäpe! (Friedensblick) Not even one fingerprint of them was found anywhere! One exception is a jogging trousers with blood of Michele Kiesewetter on it. It was found in their burnt appartment. Inside the trousers was a used tissue of Uwe Mundlos. As with other found materials – the important question remains: How did the incriminatory material end up inside their apartment and caravan?

In spite of all criticism – it must be said, that the commission was able to dig out some interesting information. It became clear, that the trio lived secretly, integrated in a secret extreme right wing network, which was infiltrated by the secret services. Some suspicious “operatives” are presented here.

In the year 1991 Denis Mahon was invited to Germany and declared Szczepanski to the leader of “White Knights of the Ku-Klux-Klan”. One year later he attacked a black asylum seeker. “Piato” was convicted to eight years in prison for attempted murder. Already during the investigative detention he was “won” as an informant. The former president of the “Verfassungsschutz” in Brandenburg Hans-Jürgen Förster said: The former secretary of interior in Brandenburg Alwin Ziel asked the former chief of the “central council of Jews in Germany” Ignatz Bubis for his opinion. Bubis should have encouraged him to recruit Szczepanski! (Hajo Funke) After his release from prison “Piato” helped  the trio in the underground (zeit), built up armed cells, which he should have motivated to commit terror attacks. After the refusal of other members the cell was overroled by police searchs according to a former member. (nsu-watch)

On 1999 an email was sent to the Ministery of Interior of Brandenburg, directly to secretary Alwin Ziel. The unknown addressor called his group the “National-Socialist Untergroundfighters” and announced armed “resistance” against the policies of Ziel. Ziel would stand against “freedom of opinion” and would ban extreme right wing music. The email gives no hint for a planned terror-campaign against immigrants. (Report of the commission, page 346)

In the burnt apartment of the trio was found a flyer, the so-called “manifest” of the NSU. There is no “confession” to the alleged NSU-terror campaign, too. Nevertheless it speaks about the “fight against the enemies of the german people”, without giving any clues, what this means exactly (lichtstadt).

It is still unclear, who produced the so-called “NSU-confession-DVD”, which was distributed in the beginning/middle of November 2011. A judge of the “Federal High Court of Justice” (Bundesgerichtshof) came to the conclusion, that the trio would not have been able to work out the movie-sequences (BGH).

“Piato” is in a witness protection program.

He was informant from 1994 to 2012 and got 180.000 Euro fees. With tax money he was sent to the US to a meeting of the Ku Klux Klan (spiegel). He founded a german section. In the KKK group were two colleagues of the shot policewoman Michele Kiesewetter. His address was found in the belongings of Uwe Mundlos. “Corelli” supported the right wing magazine “Der weiße Wolf”. In 2002 there stood the slogan “Many thanks to the NSU, it had born fruits” (Vielen Dank an den NSU. Es hat Früchte getragen.”)

He is in the witness protection program.

For month the commission was not told the truth about this informant of the agency “State Protection” (“Staatsschutz”) of Berlin. The secrecy was explained, that the unmasking could annoy a “foreign secret service”, which could threaten to end cooperation. This would not only be the case at “VP 562”.(tagesspiegel)

So after month the commission was finally told, that Starke had been an informant from the end of year 2000 until 2011. Nevertheless there is an official document from 2001, which states, that “VP 562” was already a “longtime” informant in 2001!

He was the boy friend of Beate Zschäpe. They were photographed during a cross burning 1995. According to his testimony he delivered the trio the explosive TNT for their “bomb-workshop” in 1996. It is unclear until nowadays from where Starke got the TNT. The commission could not make out any police effort solving this still open question. (Report of the commission, page 135)

The “bomb-workshop” was in a garage, which belonged a policeman. Beate Zschäpe should have rented it from him. By a police search the workshop was found early in the year 1998. Strangely no DNA or fingerprints of the trio could be found inside the garage, the only hints were their cigarette butts. Nevertheless the trio was “on the run” from this day on. They even stayed in the underground, when the arrest warrants fell under the statute of limitations several years ago.

There could be a connection to the Oklahoma City bombing from 1995. The alleged lone head of the attack should be Timothy McVeigh. There are reports, that McVeigh got to know a german in the compound “Elohim City”: Andreas Strassmeir. Another resident there was Dennis Mahon. Before Strassmeir went to the States, he became an officer of the german armed forces (Bundeswehr). The german government refused to answer a parliamentary inquiry, whether he was an informant (Bundestag). Strassmeir father was the deceased politican Günter Strassmeir from the conservative party (CDU) (spiegel). Currently a man with the name Alexander Strassmeir is state secretary of justice in Berlin, also from the party CDU (wiki). Günter Strassmeir had a son called Alexander(parlament-berlin)

The representative of the bereaved, Barbara John, declared, that the parliamentary investigation failed (nsu-watch). Central questions remain unanswered as the reason for the shredding-campaign or the dimension of the network behind the three. In contrast to that stands the opinion of commissioner Dr. Eva Högl: Out of respect for the families the case may not be made to a “never ending story” (heise).